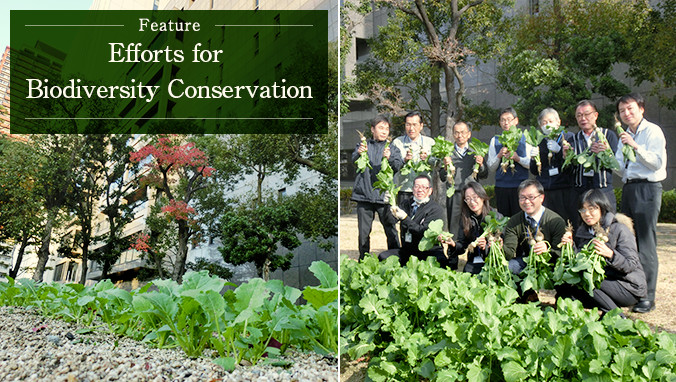 Since 2012, we have incorporated Biodiversity conservation activities into our environmental management system (EMS) activities, and we have been actively taking risk reduction action, based on the results of biodiversity risk surveys at each of our business sites in Japan.Also, since 2016, we have been prioritizing Biodiversity conservation activities, and we have worked on the revival of "Naniwa's Traditional Vegetables" (which are currently less common at stores).

On the other hand, as one of our social contribution activities, we have been working on several Biodiversity conservation activities such as "Removal of Non-native Species at Lake Biwa" and "Conservation Activity of Coppice for Zephyrus in Mt.Mikusa".

* We and Kyocera have registered with "Nijyu-maru Project", which is a Japanese committee for the International Union for Conservation of Nature (IUCN-J) and manages this project.

For more details on "Nijyu-maru Project", please refer to the following webpage:

Since April 2016, we have worked on the cultivation activity for the revival of "Naniwa's Traditional Vegetables", which are recognized by Osaka Prefecture, as part of Biodiversity conservation activities. In FY2020, in addition to the 4 vegetables including "Tamatsukuri Kuromon Oriental Pickling Melon", "Kotsuma Pumpkin", "Tennoji Turnip" and "Tanabe Radish", which we have already cultivated, we have started cultivating "Torikai Eggplant" on the premises of our Head Office.

Called "The Nation's Kitchen" during the Edo Period, Osaka Prefecture has had a rich food culture since ancient times, and there have been many kinds of prefecture's unique vegetables supporting its diet. However, after World War II, by breed improvement for the purpose of the stable supply of the vegetables, these unique vegetables had disappeared gradually. Therefore, in recent years, Osaka Prefecture has recognized them, which are currently seldom found on the store shelves, as "Naniwa's Traditional Vegetables" and promoted their revival.

We have worked on the revival of these fading traditional vegetables by cultivating such as "Tamatsukuri Kuromon Oriental Pickling Melon", which is one of the traditional vegetables at Tamatsukuri District of Chuo Ward, Osaka City where our Head Office is located, on its premises.
Formerly cultivated and harvested "Tamatsukuri Kuromon Oriental Pickling Melon" has been lightly pickled and served to the visitors including local residents to the summer festival held at our Head Office in July every year. In addition, since FY2019 we have held internal company sale of cookies and pumpkin bread using "Kotsuma pumpkin" in cooperation with local vocational aid center. This internal sale has provided our employees with opportunity that they can feel familiar with the blessings of biodiversity. Also, in every summer lightly pickled "Tamatsukuri Kuromon Oriental Pickling Melon" and "Torikai Eggplant", and in every winter turnip miso soup with "Tennoji Turnip" and "Tanabe Radish" are served at our Head Office's staff cafeteria. Through the cultivation of "Naniwa's Traditional Vegetables", we have worked on raising employee's awareness of Biodiversity conservation activities.

Because there are less farmlands due to urbanization, we think that, as a company whose Head Office is located in Osaka City, reviving local traditional vegetables in the heart of the city is important.
Under our management philosophy, "LIVING TOGETHER", we will continue to work on Biodiversity conservation activities in various ways.

If you want to see the efforts of Osaka Prefecture about "Naniwa's Traditional Vegetables", please refer to the following webpage:

We are cultivating the following 5 "Naniwa's Traditional Vegetables".

Cultivation during summer period (From April to August)

"Tamatsukuri Kuromon Oriental Pickling Melon"
The area near the Tamatsukuri-mon Gate (popularly called "Kuromon" or the "black gate" ) of Osaka Castle is the place of origin. This is the cylinder-shaped melon with about 30 centimeters in length and 10 centimeters in diameter.
"Kotsuma Pumpkin"
The place of origin is Tamade Town, Nishinari Ward (Former Kotsuma Village). This is a kind of cucurbita moschata whose weight is a little less than 1 kilogram.
"Torikai Eggplant"
This eggplant, which is about the size of a softball, was formerly a special local product of Torikai Distinct, Settsu City in the Edo period.

The followings are the photos which record the cultivation and the harvest of Tamatsukuri Kuromon Oriental Pickling Melon, Kotsuma Pumpkin and Torikai Eggplant.

● The followings are the photos which record the cultivation and the harvest of Tamatsukuri Kuromon Oriental Pickling Melon, Kotsuma Pumpkin and Torikai Eggplant.

Nowadays, it is said that diversity is considered important, but the vegetables which we habitually eat are bred for good appearance and easy mass production and are being rapidly standardized. On the other hand, production efficiency of traditional vegetables is not good because of their irregular shape and slow growth, but they have valuable genes.

As a member of the community, we will protect and nurture the genes of local traditional vegetables and pass them on to future generations, remembering the history and culture of this place.

"Tamatsukuri Kuromon Oriental Pickling Melon" was once cultivated in the area near the Tamatsukuri-mon Gate in the Edo Period and became one of specialties of Naniwa (An ancient name for Osaka) because of its high quality.

This oriental pickling melon, cultivated on the premises of the Head Office of Kyocera Document Solutions, which is located diagonally opposite of the place where Tamatsukuri-mon Gate once stood, seems like a time capsule over two hundred years.

I hope that people will think about the time when this area was crowded by people walking through this gate, talk about its growth and enjoy the flavor of this highly nutritious oriental pickling melon in the future.

In Shiga Prefecture, since 2011, our Head Office and the Hirakata Plant have been removing non-native fish species from Lake Biwa (the largest freshwater lake in Japan), which have a serious negative impact on the ecosystem in the lake, such as black bass and bluegill. Lake Biwa is an important habitat for freshwater fish. But, in spite of promoting this removal activity, the non-native species population has increased year by year and is currently estimated to be about 1,240 tons*. Another noteworthy activity which has been conducted is the cleanup of the nearby Otsu City Nagisa Park.

* Based on the data published by Shiga Prefectural Government's Fisheries Department

Conservation Activity of Coppice for Zephyrus in Mt.Mikusa (Japan)

Since 2010, our Head Office and the Hirakata Plant have conducted a conservation activity of "Coppice for Zephyrus in Mt.Mikusa" located in Nose Town, which is the northernmost town of Osaka Prefecture.

Mt.Mikusa is a low mountain, which is 564 meters above sea level. Coppice for Zephyrus, a broad-leaved forest spreading around the summit of Mt.Mikusa and a habitat for wild animals and plants, is home to 10 of 25 species of butterflies called Zephyrus, a rare species living in Japan and belonging to Theclinae. This area is designated as the Green Environment Conservation Area based on the Osaka Prefectural Ordinance for the Conservation of the Natural Environment. Part of that natural environment is Satoyama (a mountain closely connected to the people's life in a rural area), which environment is well preserved and was chosen as one of the "Top100 Terraced Paddy Fields in Japan".

The conservation activities consist of planting seedlings of oriental white oak, manchurian mlder and privet (which are food for the larvae of butterflies), installing fencing for preventing the deer from eating the trees, and repairing signboards for mountain climbers.

Annually, as a regional contribution activity, the Tamaki Plant conducts a voluntary clean-up activity at Matsunase Tideland Beach on the Kushida River, located in Matsuzaka City, Mie Prefecture. Matsunase Tideland Beach (one of the biggest dry beaches in the Ise bay area, consisting of three kinds of tidelands) is valuable, since it contains rich ecosystems in which several beach plants and aquatic organisms live. After giving an explanation about such things as the creatures living in the tideland by the teacher of Mie Junior High School (who is also the local NPO's instructor of nature observation), everyone participates in the collection of garbage scattered across the beach.

About half of the bee species living in Deutschland are in danger of extinction. Also, more than 80% of native flowering plants depend on the pollination of bees. As a result, the ecosystem in Deutschland is being devastated. In order to preserve the ecosystem, Kyocera Document Solutions Deutschland cooperates with Beefuture, which is an environmental protection organization specializing in the preservation of bee colonies for the next generations.

Kyocera Document Solutions Deutschland purchased and presented three hives from the organization to each of the three employees, respectively. Then, the beekeeper of the organization will regularly take care of bees at the employee's house.

Kyocera Document Solutions Development Philippines has held tree planting activity such as in the mountainous area near Cebu City. This activity has been held as a part of environmental conservation activities, and employees have planted the seedings of mangrove and mahogany.